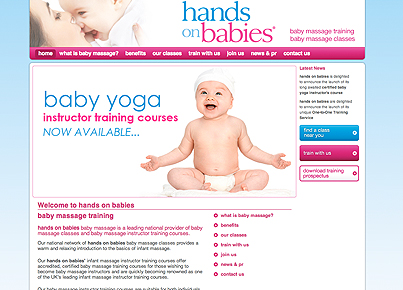 handsonbabies.co.uk has been voted as the 3rd best baby massage web site on the internet. Fighting off stiff competition from hundreds of other sites Top20Sites.com and its community of users decided that we were one of the best sites for information provision, usability, and attractiveness. Top20sites.com relies heavily on community voting, feedback, and usage patterns to determine which websites to include, which websites to exclude, and in what order websites are listed.

In addition to being placed third in the overall rating, handsonbabies.co.uk also received an impressive rating of 4.5 stars out of a possible 5. The star rating of a website is a measure of that website’s relevance, usefulness and popularity relative to other websites in its category. The greater the popularity rating, the more popular the website is considered to be.

Catherine Cole Director of hands on babies said “We would like to thank everyone who voted for us. We are delighted to be considered such a high ranking website - being voted as the 3rd best site on the internet is testimony to our brand, of which we are incredibly proud. We will strive to make further improvements and aim to offer a 5 star site in the near future.”

Hands on Babies Gets Global Approval

Does My Baby Have Colic?

Women are getting more 'hands on' in business

Baby Massage a Growing Trend in the West